Poetry and a Pint

Poetry and a pint make a marvellous combination, as will my good friend June Hall and R. V. Bailey when they appear at 'Poetry and a Pint' in St James Wine Vaults, Bath on 8th October from 8 p.m. (entry only £2/£1).

June writes with great humour and warmth about family life, but is also committed to addressing its darker untertows with unflinching honesty. It's a compelling mix. Widely published in UK magazines and serial winner of competitions, she has two collections with her own Belgrave Press.

Posted by David Clarke at 7:23 PM No comments: 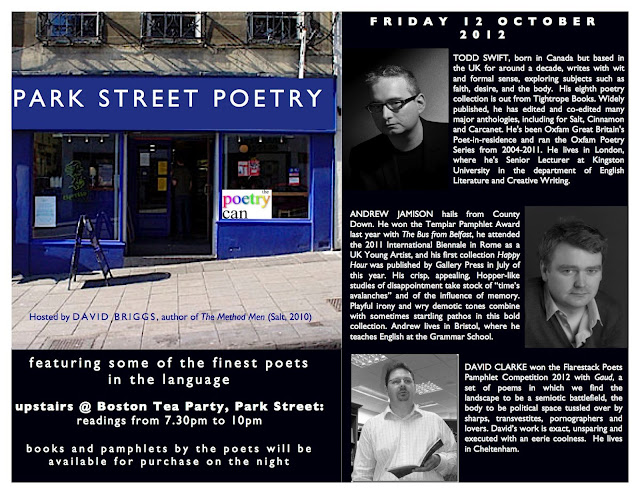 Posted by David Clarke at 8:49 PM No comments:

The Gentle Art of Self-Promotion

Recently, I placed a pre-order for Fiona Sampson's new book on British poetry, Beyond the Lyric. So far, everything I've heard about the book and Sampson's take on the contemporary poetry scene leads me to expect a great read. She has a piece in the New Statesman's current special issue on poetry which sums up her position.

One claim in the New Statesman article gave me pause, however. Sampson writes

The development of open-mike evenings, increasingly competitive in format, runs alongside the way emergent poets use Facebook and the blogosphere to broadcast poetry “achievements”. When this kind of competitive model encounters the range of poetic practices, it leads to claims that poems written one way “fail” to do what those written in another can.

I'm not going to directly criticise Sampson's thesis here, because (and this is part of my point), I don't feel that being negative is part of the function of this blog. And I'll leave aside the argument about open mics (in general, these are not competitive - I think she means slams, which definitely are. Also, shoot that copy editor over 'open-mike' - who he?). But, as someone who might at a stretch be described as an 'emergent poet' (or someone who would like to be, I suppose!), and as someone who uses this blog and Facebook to let friends and the world at large know when I have something published or am taking part in an event, for instance, Sampson's criticism makes me question myself. Am I really broadcasting (even trumpeting?) trivia which only I (so the implication of the quotation marks) would regard as worthy of the name of achievements? Do I do so in a spirit of competition, eager to make myself look better in relation to others? Does publicising my (really very minor) successes de-legitimise what others write?


Now, I know that Sampson doesn't mean me personally (my ego isn't that inflated), but I think it's worth my considering whether these charges stick in my case.

Well, yes, this blog did emerge out of the impending publication of my pamphlet (quick plug, there, obviously) and I do let people know when I get something published or do a reading, which isn't that often. But, really, the whole thing for me is about joy. My joy in reading poetry became a joy in writing it (although not unalloyed joy, it has to be admitted), which has now become a joy in sharing what I have written and the work of other poets who mean something to me. Ultimately, this is something I do for pleasure, not to compete with others.

The blogs and Facebook pages by other poets I enjoy (Matt Merrit, Roy Marshall and Todd Swift's Eyewear get honourable mentions here) have the qualities I am aiming for: reading them tips me off on the latest publications by other poets they themselves enjoy, lets me know about events I could attend or take part in, gives me insight into their enthusiasms and - from time to time - lets me know that there is also something of their own to read on-line or elsewhere. I'm glad to have all of this because I like their work and trust their judgement.

Without trying to paint myself as entirely selfless, I'd also point out that promoting one's own work is not just promoting oneself. Small publishers and magazine editors put in huge amounts of work and love to promote poets' work and reach readers, so when they print something of mine or print something I have really enjoyed, I feel duty bound to do all I can to help them in that effort. The really great thing about social media is the possibility for readers and writers to interact in new ways which help to promote stuff which would otherwise drown in the general din. That stuff can be one's own, but, as John Self recently wrote in The Guardian, we can all be champions of the things we value using the Internet, even if we didn't write them ourselves.

So, I don't feel Sampson's charge is justified, but I'm still looking forward to reading her book. Which I found out about on Facebook, as it happens.
Posted by David Clarke at 2:15 PM 1 comment:

In these days of austerity, the arts are prime targets for cuts - and people who work a 'day job' to fund their own artistic endeavours, like everyone else, can have a hard time of it. Crowd-funding is a novel way of addressing some of the pressures, and poet Adam Horovitz is currently asking those who have enjoyed his work, and supporters of poetry more generally, to give a little so that he can take up a prestigious Hawthorden Fellowship later this year. You can find more details here.

It needn't cost you the earth to help Adam out. In fact, you can sponsor him for as little as £1. He's already raised over £100 of the £800 he needs, and it would be great to see him achieve his target. Please give something if you can.
Posted by David Clarke at 10:26 AM No comments: 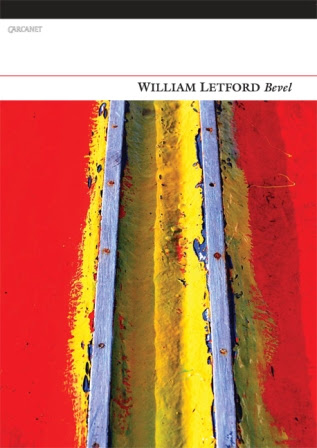 This is an original début by a fascinating new voice.
Posted by David Clarke at 8:30 AM No comments: