Get ready! You're in for it!

So opens a stimulating new anthology of French poetry, Writing the Real, edited by my good friend Dr Nina Parish and her colleague Dr Emma Wagstaff. The words are those of Christian Prigent, whose oblique, surreal, linguistically playful work opens a collection as varied as it challenging. Rather than foregrounding any one tendency, the editors have done a good job of introducing a range of voices that (outside of a few translations through mirco-presses) will be largely unfamiliar to a UK audience. While the experimental end of writing practice is very much the focus here, those experiments are of many different kinds, ranging from the more process-driven approach of Jean-Michel Espitallier ('Tales of up to 15'), or the interrogation of the banalities of everyday language in Christophe Tarkos' poems ('Song 1' and 'Love'), to the New York School-ish work of Stephane Bouquet. Female poets are strongly represented (for example, Anne Portugal and Sabine Macher) and the editors have done an excellent job of providing an introduction that sets the scene and gives us a sense of who the key players are, while at the same time leaving us free to come to our own judgements. Where further translations are available, details are provided to allow us to follow up on other publications by the poets whose work most holds our attention. The translations themselves are by various authors, many of them practicing poets themselves (such as Keston Sutherland), but the texts are presented alongside the original French, which is always a bonus in this sort of edition. Even if our own grasp on the language is not so strong, we can begin to approach the original texts once we have absorbed the translations.
French poetry seeps into the consciousness of UK readers in a fairly sporadic way, driven by the enthusiasm of translators and other advocates for particular authors, so it is a great thing to have this overview of writers whose work might not yet have appeared on our radar. What is most striking about the differences between French writers and UK poets, if this anthology is anything to go by, is the extent to which longer sequences rather than self-contained short poems appear to dominate, alongside a strong tendency towards the prose poem. French poets are clearly working on larger canvasses than many of their UK counterparts, and that alone is a good reason for UK writers and readers to be grateful for this book.
Enitharmon are also to be congratulated on the design on this volume, which looks great!
Posted by David Clarke at 5:21 PM No comments: 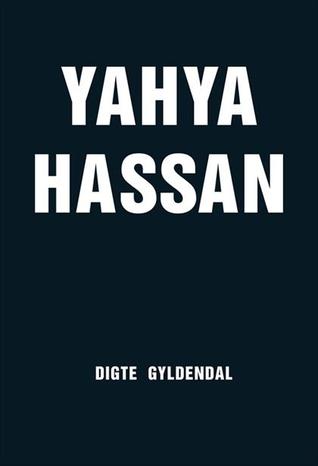 Posted by David Clarke at 8:43 AM No comments:

Matthew Stewart at Rogue Strands has been kind enough to include 'A Thing for Poetry' among his best blogs of 2016. Good to know that the blog is read and appreciated, and also very helpful of Matthew to have provided this excellent list of the best in UK poetry blogging. There are certainly some here I need to explore more thoroughly. 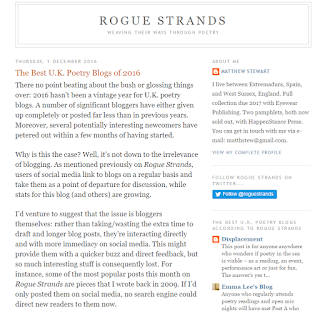 Posted by David Clarke at 9:20 AM No comments: