One of the questions I get asked now and then about poetry, and one of the more interesting ones, is about the difference between song lyrics and poems. Are song lyrics just poems with musical accompaniment? Are lyricists poets? After all, from time to time, publishing houses (I mean you, Faber and Faber) try and milk a few book sales and a bit of pop-cultural kudos out of putting out collected lyrics by various singer-songwriters.
The answer to the question of how to distinguish song lyrics from poems is, I think, both straightforward and quite complicated. The straightforward answer is that a poem can exist on the page or in performance without music. It makes its own music, that is to say that the sound, structure and rhythm of the poem are sufficient to produce the poem's overall effect. You could set a good poem to music (and there are many examples of this in the history of music), but then you are making something new. The poem itself doesn't need the music. Lyrics on the other hand, while ideally working well with the music which accompanies them, might struggle to have anywhere near the same effect as poems without music.
So, that's the basic position - but then things get complicated. In reality, we probably have to imagine the relationship between poems and songs lyrics on a sliding scale. At one end, we have lyrics that work wonderfully with the music they were written for, but which would be much less impressive on the page. There are many varieties of this phenomenon, but we could take the example of Paul McCartney's lyrics for 'Yesterday', one of the most successful popular songs ever written, to stand for those lyrics which, on the page, would seem hackneyed and uninspiring, but which are magically transformed in combination with that great tune (and McCartney's brilliance as a performer). Let's face it, rhyming 'yesterday' with 'far away' and 'here to stay' is not the stuff of great poetry. Without the tune (which is pretty hard to forget) it would not be great art. With the tune, it unquestionably is. Another variety of the lyric which can't survive without the tune would be the work of Morrissey. A remarkably lyricist, many of Morrissey's texts actually have relatively few words in them, but these are repeated, woven in and our of the melody and subjected to some of the most extraordinary performances you are likely to encounter. Just think of what he does the with the word 'etcetera' in 'Sweet and Tender Hooligan'. Apart from all of his wit and insight, what makes Morrissey's lyrics work is the way they are sung.
At the other end of the scale, there are certainly song lyrics which, although they might have a different kind of impact, could easily survive on the page without any knowledge of the music which normally accompanies them. Leonard Cohen, who of course is a published poet as well as a songwriter, is the name that comes to mind immediately. Lyrics like 'Chelsea Hotel #2' or 'Tower of Song' have that quality. And somewhere on this scale, between Leonard Cohen and 'Yesterday', most other song lyrics have their existence.

Another interesting sub-category are lyrical collaborations between poets and songwriters. So, for instance, Frank McGuiness has written lyrics for Marianne Faithfull, Paul Muldoon worked with Warren Zevon, and Jeremy Reed collaborated with Marc Almond on Piccadilly Bongo. There are sure to be others out there I don't know. Feel free to leave me a recommendation!
Posted by David Clarke at 10:11 PM 3 comments:

My fellow Nine Arches poet Sarah James has been kind enough to publish an interview with me on her blog, as part of a new series called 'In the booklight'. Sarah came up with some really interesting questions - I hope the answers are worth reading too! It was really rewarding to enter into a dialogue with someone who had read Arc so thoughtfully. Click here if you want to read the whole interview. 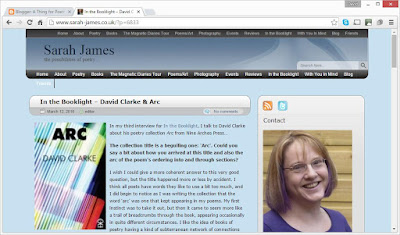 Posted by David Clarke at 9:03 PM No comments:

Whether you like it or not, readings are part of being a poet who is trying to flog a book (or pamphlet). As it happens, I rather like them. They are a chance to show off, at least. But mainly, I enjoy performing my work, although I'm not a 'performance' poet in the commonly understood sense. Although I always read out my work when I am writing it (the composition process happens somewhere between voice and page), it is only when I have a room of people looking at me that I really get a sense of how the poem could sound, which is often different from reading to reading. Reading other people's work aloud does this too -- even poems I know well can offer something new when spoken.
A lot of poets plan readings very carefully. I know I should, but it only makes me nervous. So, I try not to think about it until I enter the room and get a look at the audience. When events feature open mic slots, especially when the guest poet goes on last, this is a real help, as it is usually possible to pick up a couple of cues from poems that have already been read out as a starting-point for my own reading. Otherwise, I try to use my initial poem as the one that is going to capture people's attention, then take it from there. There's no use giving them a tiny, quiet and possibly slightly obscure poem to begin with. It might work on the page, but the opening of a poetry reading needs something big and bold. Equally, I've always found that the last poem works well if it can make the audience laugh. I don't do comic verse, but something that at least makes people smile is a good note to end on. By now, I've come to realise which poems can raise a titter, and I keep them in reserve. Only once did this go horribly wrong when my last, humorous poem, a sure-fire hit at every other reading, left an audience stony-faced. You can't win them all.

The thing I like least about readings is the terrible sense that, if the whole audience doesn't rush to the book table clutching a greasy tenner in their hands to buy the book, they must have hated the whole thing. This is silly, I know. Not everybody has the money to buy new poetry books every day of the week, and most people will probably not be instant fans in any case. It is lovely when people do buy the book and want to talk to you (or even when they just buy it!), but I've had to learn to take myself to a far corner with a glass of wine and ignore the business end of things. This also involves resisting the urge to fall at the feet of the few hapless book-buyers who have parted with their cash.
Happily, I have quite a few readings and other events in the coming weeks and months. On 19th March, I'll be in Birmingham taking part in one of the Vanguard readings (full details above). Then, on 12th April I'm taking part in the Ledbury Poetry Salon, which will involve and interview and a reading (further details to follow). On 27th April, I'll be appearing at a new event, In Your Own Words, organised by Miki Byrne at the Roses Theatre in Tewkesbury (from 17.00 to 19.00). Let's hope they all laugh at the funny ones!

Posted by David Clarke at 8:00 PM No comments: