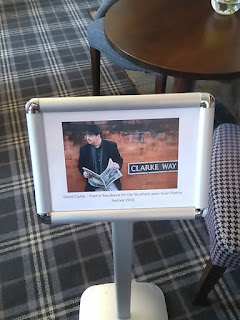 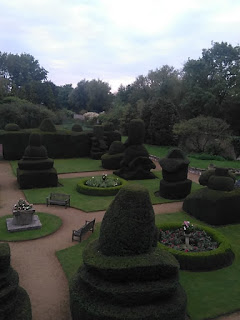 I'm fascinated to see what work has emerged from the other residencies. What has struck me most about the residency experience is the role of chance. I made plenty of plans for the residency, and I'm glad I did, but in the end I found myself having to respond to situations and encounters I could never have predicted. Still, without that element of randomness, I would have only written what I expected to write, which would not have been nearly as much fun.
Posted by David Clarke at 4:43 PM No comments:

Logging on to look at my blog, the statistics tell me that my post on Top Ten Autumn Poems is getting hits again. Clearly, when autumn arrives, we cannot help but turn to poetry. My autumn certainly has plenty of poetry in it, with a reading with Cliff Yates at my favourite monthly poetry event Buzzwords on 2nd October and my participation in a very exciting residency with Stratford-upon-Avon Poetry Festival. 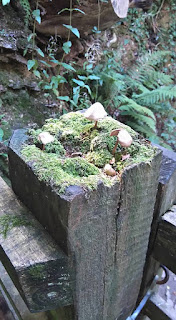 For the residency, I will be based for two days at the Billesley Manor Hotel (19-20 September) and will also take part in a reading on 24 September with other poets who have been brought into local businesses to create some 'Unexpected Encounters'.

I'm also hoping to put on a short performance on 'The Poetry of Hotels' while I am at Billesley. You'll be able to find updates on that here and also on my Twitter feed (@davidcchelt).

The various residencies at the Festival will contribute to an online publication of poetry produced in Stratford. The link will be posted on this blog as soon as the project is complete.

In other news, four of my poems have just been published in Bare Fiction magazine, which is an outlet I've been wanting to get into for a while. This little magazine packs a real punch, combining fascinating new poetry, drama and fiction in a carefully designed package.

Also on the publications front, the crucible of discontent that is New Boots and Pantisocracies is about to make the transition from the screen to the page with an anthology from radical publishers Smokestack Books. I've just seen the proofs, which include my poem 'In the Snug', and it really is going to be a corker. There is passionate and spiky work here from just about all of my favourite contemporary poets (Sean O'Brien, Rachael Boast, Tony Williams, Helen Mort, Ian Duhig, Ciaran Carson...). Let's hope there is a post-Brexit sequel!

Posted by David Clarke at 8:59 PM No comments: