Rona Laycock, the driving force behind the Gloucestershire Writers' Network, has organised this great event during the Cheltenham Literature Festival to celebrate the GWN competition 2012. 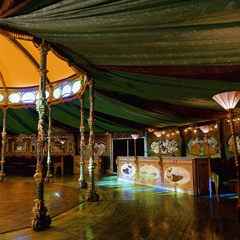 The competition winners and runners up will be performing amid the baroque elegance of the  Spiegeltent.

Posted by David Clarke at 7:15 PM No comments:

I'm very pleased to have been included in an excellent 'pop-up anthology' inspired by the BBC's 'Great British Bake-Off' series, alongside Cliff Yates, Adam Horovitz, Jacquline Saphra, Simon Barraclough and others. I have to admit, I don't get to see a lot of TV, but I do love baking and poetry.

You can take a look at my poem here, at The Great British Bard-Off, which is still taking contributions on any baking-related subject. And as for the cake, here's one I made earlier: a German Pflaumenkuchen, no less. 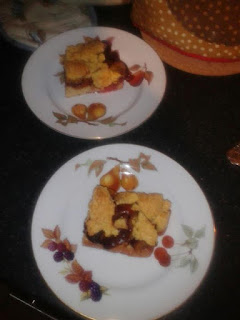 Posted by David Clarke at 5:31 PM No comments:

A while ago, Rachael Boast, who was my tutor at The Poetry School for a couple of terms, invited me to contribute to a volume of ekphrastic poems responding to works of art displayed publicly in Bristol. After a very pleasant day wandering around the Bristol Art Gallery and other art spaces in the city, the image that stayed with me the most was Karl Weschke's picture of 'Leda'.

I almost immediately realised that this was a bad idea, given the long history of depictions of Leda in all kinds of media, and the obvious reference point of Yeats' famous poem. Nevertheless, Weschke's depiction of Leda not as victim, but as bearing down upon the enigmatic swan, suggested a whole other story, a re-writing of the myth. And a deeply unsettling re-writing at that. 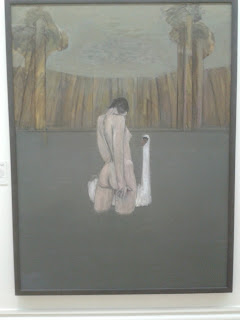 I hope that the poem I've produced, with much support from Rachael, is up to the challenge of engaging with this powerful image. For anyone interested in hearing it, I will be taking part in an event in Bristol on 21 August, where the main reader will be T.S. Eliot prize-winner Phlip Gross.His performance will be worth the meagre £2 entry fee alone. Please do e-mail the organiser to reserve a place.

Poetry and Art in Bristol

This event arises from a unique year-long project to gather poems inspired by artworks in Bristol.
There will be a discussion between the poet Philip Gross and the sculptor Simon Thomas about their
respective pieces entitled ‘SmallWorlds’. There will also be readings and contributions by Ralph Pite,
Edson Burton, Jane Griffiths and many other poets and visual artists.
Wine reception afterwards.
Entry is £2 (payable on the door) but places are limited to 60.
email: adam.hanna@bristol.ac.uk to reserve a ticket.

Posted by David Clarke at 8:18 AM No comments:

The Invention of Language

Forgive these rather unformed thoughts, but after I blogged about line endings a while ago, one of my fellow workshoppers challenged me to post about the next topic put to us by our leader, Polly Moyer. In our last workshop, Polly got us thinking about invented words, which reminded me of an excellent talk I heard at Cheltenham Poetry Festival this year by the poet-lexicographer Giles Goodland. Goodland's main point was that, in the past, poets were actually a source of new words, expanding the vocabulary of English as a young language by coming up with new ways of saying things that needed to be said. The greatest word inventor was Shakespeare, with over 1700 coinings of his still in common usage. Once we have a standardised language, of course, with dictionaries, grammarians and English teachers, some words are 'right' and some words are 'wrong' or disallowed.

But inventing words is still a fundamental human instinct. Reading Roy Marshall's excellent Gopagilla (Crystal Clear, 2012), for example, I am reminded of how children learn language as much by making new words and playing sounds as by simply imitating what already existing - Roy's title is a word invented by his son. And poets, I think, have to remain as much language inventors as language imitators. While there is much to be said for the precise use of the arsenal of language as it is, there should always be room for the creation of new words where that invention gives us access to untapped experience. For instance, Paul Farley gets a whole poem out of someone else's invention of the word 'landy' to describe the smell of land from the sea after a long solo voyage (in his collection Tramp in Flames, Picador 2006).

For anyone who wants to try their hand at word invention, I can recommend Oli Hazzard's poem 'The inability to recall the precise word for something' which provides a list of things in the world that are still in search of some precise terminology (the recording is not that great - you can also find the poem in The Salt Book of Younger Poets).

Finally by way of my own contribution to word-coining, here's a poem I wrote a while ago, an unashamedly romantic sonnet, for which I came up with the term 'unkeltered'. Somehow, nothing else would do.

Your body’s the only warm thing in the room –
One finger keeps me moored to it, for safety,
until I am unkeltered by a moon
that fixes me cold and drives me out to sea,

where limbs of kraken scrape against my hull,
then pitch to depths where flitting shoals collide
and squirm with eelish memories, whose shocks seemed dull
when I was still salt-roped along your side.

I’m off the radar, a green and ghosting blip,
a bottle with its SOS unread.
My thousand lies send out their fearful ships
to sink me fifty fathoms to the dead.

Still, from your sleep, you cast a saving hand
that drags me back, anchors me to land.

Posted by David Clarke at 12:58 PM No comments:

As promised, I can now give details of where to buy 'Gaud', as well as the other great Flarestack Poets pamphlets, on-line.

Just click here to go to the bookshop at Ikon Gallery in Brimingham!

Gaud is also now available direct from the publisher, Flarestack Poets. Click here to go to their on-line shop.
Posted by David Clarke at 11:28 AM 2 comments:

I was delighted to hear a couple of days ago that I am the winner of the poetry section of this year's Gloucestershire Writers Network competition. I was a runner up in this competition a couple of years ago, so it's particularly satisfying that I've been successful this time around.

My poem 'How It Was' was inspired by meeting Richard Pietrass, an East German poet, and translating some of his work, which captures so well the contradictions between conformity and the resilience of individual human identity under dictatorship. As the theme of the GWN competition this year was 'people power', I was in a good position to write a poem on this very subject.

Thanks to Alison Brackenbury, the judge of the competition, for her generous comments on the poem:

'Everyone, I think, has moments of vision and it is the poet’s privilege to try to capture these.  I felt that the winning poem, "How it Was", succeeded marvellously.  Its brief but compelling lines convey the gap between the flags and ceremony of an oppressive state with the anarchic, private lives of its people.  The poem is patterned by repeated, powerful contrasts.  Its rhythms vary from the urgent beat of a short line about blood to the long-drawn-out fall of a lazy afternoon. This is a quiet but profound poem which I shall remember with admiration.'

I'll not post the poem here yet, as it will soon be appearing in the competition anthology. However, there will be an event in October at Cheltenham Literature Festival where the winners will read. More on that soon. And, if memory serves, there is even a trophy to collect - I'll make a space on the mantelpiece!
Posted by David Clarke at 9:53 AM No comments:

I'm just about recovered now from the intense experience of presenting poems from my pamphlet Gaud at the Flarestack Poets launch in Birmingham on Tuesday night.


Jacqui and Meredith, the Flarestack editors, had found a really great venue in the Ikon Gallery, supported by Writing West Midlands; and the other poets and members of the audience were extremely friendly and supportive. All three of the competition pamphlets seemed to be selling well and I even got to sign a few of mine own.

The quality of the competition entries was clearly very high, particularly the poems of my fellow prize-winner Nichola Deane. Favourites of mine among the shortlisted and anthology poets were Jacci Garside, Oliver Comins, Claire Dyer, Michael Conley and Roy Marshall.

I can't say much about my own reading, as it all seemed to go by in a blur. I think I got the introductory-chat-to-poems-ratio about right. There's a review of the event here, at Gary Longdon's blog.

Gaud will soon be available to buy via the Flarestack website, where you can also get hold of their other excellent pamphlets. Otherwise, copies can be had from me in person at forthcoming readings.
Posted by David Clarke at 9:36 AM No comments: