Cheltenham Poetry Festival 2017 will soon be with us, and this year Festival Director Anna Saunders and her team have put together an exceptionally good programme. You can find full details here on the festival website, but here's a preview of a few of my personal highlights. 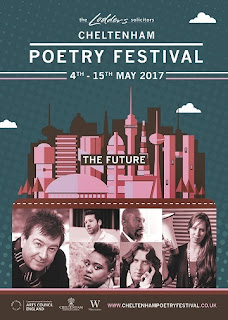 On Friday 5 May, Matthew Sweeney will be reading with Ben Parker at Smokey Joe's in Cheltenham at 19.00. Matthew Sweeney's reputation needs requires no further comment from me, but this event will be particularly worth attending to hear work from Parker's first collection, The Amazing Lost Man. I've been a fan since reading his first pamphlet a few years ago and I'm eager to hear the new work.

On Saturday 6 May at 17.00 in St Andrew's Church, Jane Draycott will be reading from her translation of the 14th century poem The Pearl as well from new work. I'm intrigued to hear more about the process of rendering this beautiful text into contemporary English.

On Sunday 7 May at 15.30 in the Cheltenham Playhouse, I'm looking forward to hearing a showcase of poets published by Worple Press, one of out best independent presses, and especially to a reading by John Freeman from his collection What Possessed Me, as previously featured on this blog.

Also on Sunday 7 May, at 19.00 in the Cheltenham Playhouse, I'll be hearing Paul Stephenson read from his Happenstance pamphlet The Days that Followed Paris, which engages with the aftermath of the November 2015 terror attacks in the French capital. I'll be reading a couple of poems myself, alongside other local writers, on related themes. The intersection of poetry and politics is very much to the fore in this year's festival, and I'll be fascinated to see how Stephenson deals with this difficult subject matter.

On Monday 8 May, my fellow Nine Arches poet Roy McFarlane will be reading with Michael Henry and Tricia Torrington at the Playhouse from 19.00. For those who have never seen Roy perform before, this will be a revelation. The work is brilliant on the page, but Roy's charismatic delivery is not to be missed.

On the evening of Tuesday 9 May, there are two treats in store: a reading with Gram Joel Davis from his much anticipated V Press collection, Bolt Down this Earth, and new work from Rory Waterman. Be at the Muffin Man in Cheltenham from 19.00 for this two events!

On Wednesday 10 May at 19.45, Cheltenham Poetry Festival's very own Howard Timms will be offering a performance of his own drama about Oscar Wilde. Howard himself will be in the eponymous role for Oscar Wilde's Women, which is sure to be a treat.

On Thursday 11 May at 20.00, also in the Playhouse, Indigo Dreams will be showcasing a number of their poets, including Jennie Farley, who has previously featured as a guest poet on this blog. Indigo Dreams is building up an excellent list and there will be something here for everyone.

I'll be at the festival all day on 13 May, first running a workshop on 'Poetry and Politics' (a few places still available!), then reading with Alistair Noon at 17.00 in St Andrew's Church. In between those two events, I'll be listening to Sasha Dugdale and Alistair Noon talking about poetry and translation and hearing readings by Sasha Dugdale and Katherine Towers.

That same evening, Stuart Maconie returns to the festival to share some of his favourite poetry. I saw him last year and have remember it fondly as a warm, witting, moving and enlightening performance. Maconie is a real poetry fan-boy and his enthusiasm is infectious. The event will take place at 18.30 in Cheltenham Playhouse.

On Sunday 14 May at 14.00 in St Andrew's Church, I'll be listening to Fiona Sampson discuss Mary Shelley and the reading with Sampson and others that will follow. Sampson is one of our best poets, but also an excellent and lucid critic, whose views are always worth hearing.

Needless to say, there are plenty more delights on offer this year, with slams, performance events, workshops and poetry films, to mention only some of the other varieties of poetry in the programme. Small festivals like this survive on ticket sales and the support of the poetry-loving public, so I urge you to book early and make the most of this year's festival!
Posted by David Clarke at 4:34 PM No comments:

This year, the beginning of National Poetry Writing Month coincided with my reading Ian Hamilton's collected poems. In his preface to 1988's Fifty Poems, reproduced in Alan Jenkins' informatively presented edition of Hamilton's work, the poet wryly addressed his own lack of productivity: 'Fifty poems in twenty-five years: not much to show for half a life-time, you might think. And, in certain moods, I would agree.' But, Hamilton concludes, 'Why push and strain?'
Hamilton published seventy-odd poems in his lifetime, of which he only thought sixty worth preserving. That's about two year's worth of NaPoWriMo, as it has become known. I wonder what he would have made of it? This was a poet who was all about concision and distillation, who was clearly only writing those poems he felt needed to be written, or that he needed to write. The idea of producing drafts of thirty poems in thirty days, on the other hand, arguably speaks of a desire simply to write, rather than of a need to write something in particular. I think those impulses are probably more evenly balanced in the work of most poets, since writing in itself is (or should be) a pleasurable activity.
Of course, Hamilton was hardly a lazy man: he wrote literary biography, edited magazines, wrote for literary journals, and so on. But he was never a 'professional' poet. Like his contemporary, Larkin, who also published a relatively slim body of work in his own lifetime, he had plenty of other bread-and-butter stuff to be getting on with.
I'm not against NaPoWriMo at all. Firstly, there are enough people in the world who spend their time disapproving of things that other people do (the opinion columns of our press are full of such sounding-off). Secondly, I would have to admit a certain jealousy. April is not the cruelest month for me, but certainly one of the busier ones in the year. I don't have the time or the excess mental energy to be churning out thirty poems, but I am envious of those who do. However, I would also say that it does concern me sometimes that our poetry writing culture (on-line and elsewhere) is so very fixed on production: workshops, residential courses, writing prompts. The injunction seems to be that we must write more and ever more poems. While it is a marvelous thing when people are given the confidence to write, while nobody should be discouraging anyone from doing so, I would also want to say that it is okay to write more slowly, to be less productive, to revisit, revise, to stop writing for a while, to spend more time reading than you ever do with a pen and notebook (especially that!). Is this a suggestion for National Not Writing Poetry Month (NaNoPoWriMo)? Well, hardly. I have plenty of those anyhow. But in this culture of productivity, poets also need permission to go slow, or at least find their own pace.
Posted by David Clarke at 9:20 AM 4 comments: