States of Independence is an independent publishers' fair held annually at De Monfort University in Leicester, home of one of the region's liveliest creative writing programmes. I've been meaning to get along to it for a couple of years now, but have now finally had the time to make the trip. It was well worth it. Apart from the all too-tempting book stalls (see my haul of purchases below...), the readings and discussions were some of the most stimulating I've experienced for a long time. 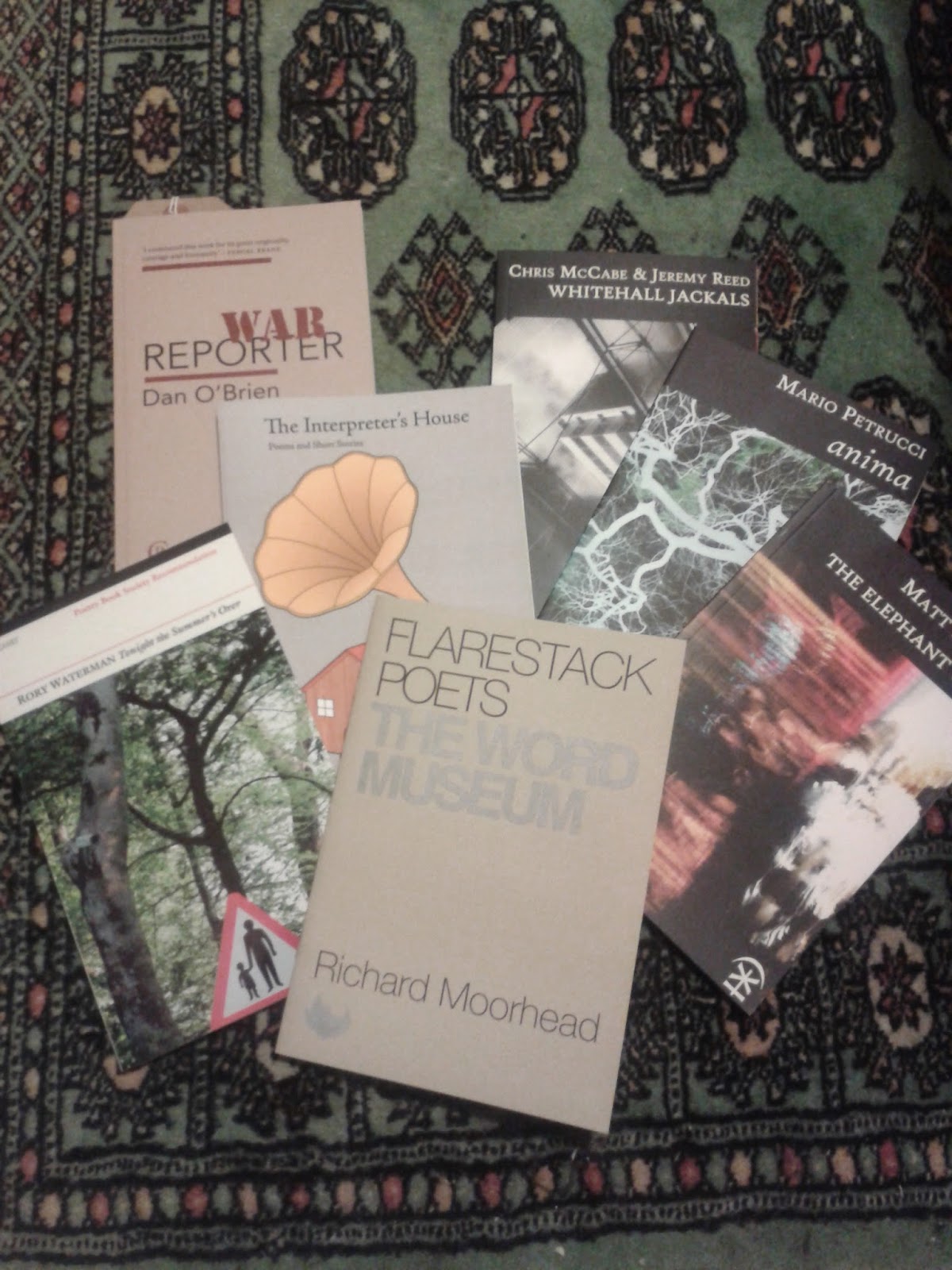 Sadly, it was impossible to attend everything on offer, but here are some impressions of the events I was able to see.

The morning began promisingly with 'The Poetry of Sex', presented by four poets recently included in Sophie Hannah's controversial anthology of the same name from Penguin. Although some of the participants had mixed feelings about the anthology itself, their poems, and the discussion afterwards, threw up lots of interesting questions about what sex in poetry could be about, apart from being about sex itself. Rich Goodson's impressive prose poems drew on mythology and theology to present sex as a transformative and potentially subversive force, whereas Cora Greenhill's poems explored the gender politics in various sexual encounters. Gregory Woods reflected on the place of depictions of gay sex in the fight for equality, and Maria Taylor's poems discussed sexuality in the context of her Greek Orthodox upbringing.

In the next session, Peter Hughes of Oyster Catcher Press presented three pamphlet poets: Alan Baker, Kathleen Bell and Sarah Crewe. Baker's wry collages of everyday thoughts and perceptions produced a restrained lyricism, while Bell's elliptical, fragmentary work was particularly effective in a sequence on the drowning of immigrants at Lampedusa. Here the poet drew on tales of legendary European travelers to weave a complex inter-textual fabric, which was political without being polemic. Sarah Crewe, who had traveled from Liverpool, delivered a blistering performance of highly original 'working-class, feminist psychogeography', then fairly brought the house down with a sequence of poems which re-imagines Steven Spielberg's Jaws from a feminist perspective. Her re-appropriation of pop culture (including the Thundercats) to political ends was witty and compelling.

At one o'clock, a full room was treated to a reading by Roy Marshall and Rory Waterman, both of whose debut collections came out last year. Marshall and Waterman both often write ostensibly 'personal' poetry (family plays a significant role), but they also have in a common a precision of expression and brilliant handling of imagery (especially of the natural world) which I very much admire. Waterman's book, Tonight the Summer's Over, is perhaps more melancholy than Marshall's collection, but certainly a worthy Poetry Book Society recommendation.

The final event I attended was hosted by Bold Strokes Books, an LGBTQ publisher, who had invited a panel of authors along to talk about the extent to which LGBTQ literature needs to move out of the ghetto of the bookshop's 'gay and lesbian' section. There was a strong feeling in the room that the community (or possibly communities) still needs and wants books for themselves, but there was also an unresolved tension with the desire among authors to write what they chose without being bound to represent a particular group, and to have their writing read by a wide spectrum of people. The relatively brief discussion was never going to resolve this issue, but it was good to hear the conversation carrying on in the corridor afterwards. Also, it was fascinating to find out about developments in LGBTQ publishing in recent years which had passed me by.

In between all of this, there was a chance to chat with publishers, magazine editors and many familiar faces, including Jacqui Rowe of Flarestack. On the train ride home, in the spring sunshine, I was already beginning to read the book purchases I had filled my bag with.
Posted by David Clarke at 8:31 PM